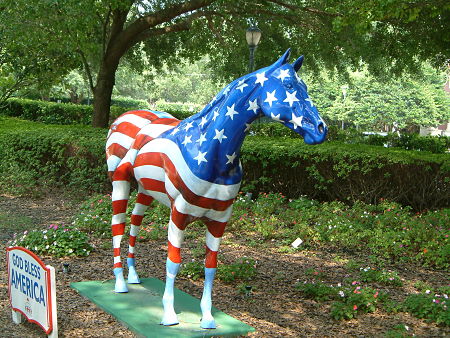 The Decisive Confrontation Of The
Revolutionary War Was The Battle
Of Yorktown But Which Foreign
Country Provided Crucial Help?

Before we became independent we were actually 13 separate colonies under the rule of England.

July 4th became a national holiday to commemorate the adoption of the Declaration of Independence on July 4, 1776, declaring independence from the Kingdom of Great Britain.

The 13 red and white stripes on our flag stand for the original 13 states (colonies).

Originally our flag had 13 stars, but now has 50, one for each state in our country.

You can understand now, the unusual decoration of the horse above.

The American Revolutionary War started in 1775 and lasted until 1783 (The Treaty Of Paris).

But, the decisive confrontation of the war occured at Yorktown (Virginia) in October, 1781.

The British army was lead by General Lord Charles Cornwallis. He was confronted by three armies, one of which was French, (about 8,000 soldiers), lead by General Jean-Baptiste Ponton de Rochambeau.

The other two American armies (about 9,000 soldiers, total) were lead by General George Washington and the Marquis de Lafayette.

In addition, there was a French fleet that blockaded Chesapeake Bay, so there was no escape possible by sea.

A month earlier the British and French fleets had fought an indecisive battle (Battle of the Chesapeake), and the British fleet had to sail back to New York City for repairs.

So, the three armies closed in and laid seige to General Cornwallis’ fortified positions.

After approximately ten days of fighting, Cornwallis assesed the situation, concluded it was hopeless, and surrendered! (0ver 7,000 troops)

There were some minor battles after Yorktown, but essentially that was the effective end of the war.

In England, the peace party took control of Parliament the next year (1782), and domestic British political support for the war evaporated.

In April 1782, the House of Commons voted to end the war in America.

The Treaty of Paris followed in 1783.

We Americans owe the French a lot and I for one take this opportunity to express my gratitude.